I had been really excited about this race since we (my coach and I) had decided to target it back in October 2017, and as one of my primary focuses for 2018 I had done a decent amount of prep for it.

Having watched the Tour de France riders battle their way up the infamous climb just a couple of weeks before the event I couldn’t wait to get out to France and see it for myself! After 30hrs of travelling we arrived at our apartment for the week in Bourg d’Oisans, at the foot of the Alpe d’Huez climb, with four full days before the race. Some time to learn as much as possible about the course and to do any final prep.

All events have their own unique quirks but there was plenty to distinguish this from others: a swim in a hydroelectric dam facility where swimming is forbidden any time other than the race; split transitions around 20km apart (and 1000m elevation), a 120km bike course taking in two significant alpine mountain passes (at least 12km & over 1300m) before tackling the infamous Alpe d’Huez climb with its 21 hairpins; 35degree heat; and a 20km run at over 1800m altitude! 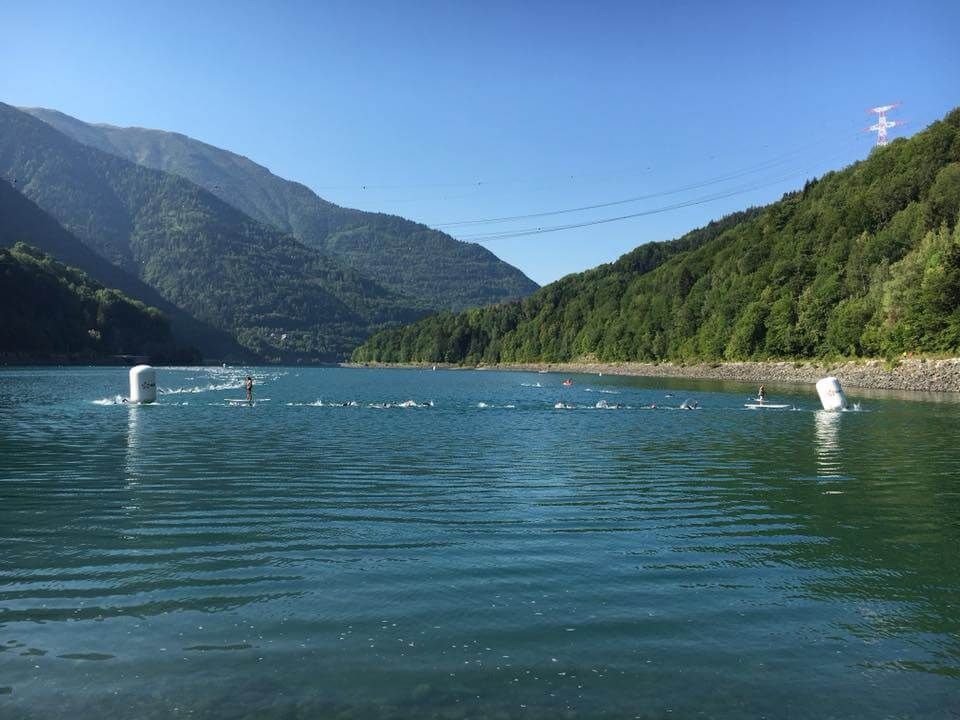 An early start on race morning, coffee, porridge and a banana to fuel myself up and we were on our first ascent of Alpe d’Huez (thankfully in the car this time) to drop our trainers and run gear off in T2. The second transition area was on a 3G football pitch and I was positioned in between my two Racepace team mates. With T2 prepped we then had another 30 minute drive down to the swim/T1 area at the EDF Lac du Verney. With everything set up in T1 it wasn’t long before I was getting into my Arena Triathlon Carbon wetsuit and after a short briefing we were allowed into the water, a comfortable 18 degrees, and assembled on the start line, watching the digital clock tick towards 09:30.

The horn blared and we were away into a mass of flailing arms and kicking legs as 1100 athletes tried to progress towards the large white buoys which marked the rectangular course which we would complete two laps of. I got away quickly and whilst keeping an eye on my route directly towards the first buoy (with some sighting strokes) I moved over to slot onto the feet of another swimmer. Before long I was sat nicely in third position feeling relaxed at the pace but reminding myself that it was going to be a much longer day than just a 2.2km swim. A quick check around the first buoy and there were five of us moving clear of the masses – great! On the return leg of lap one I noticed the lead swimmer seemed to be veering well left of the target buoy, and chose to stick on a straighter course. In doing so I isolated myself as the other four stuck took the left trajectory. I felt I was swimming a tiny bit faster and had actually moved in the lead, but again reminded myself of the duration of the whole event and timed my effort so that as the others arrived at the turn to start the 2nd lap I slotted back into 3rd position. With the overall race distance in mind, I decided to stay on the feet conserving some energy, even if it meant swimming slightly further. The second lap passed without incident and I was soon jogging up the ramp too T1 in a pleasing 3rd place. A slick transition, including putting all my gear in the big, black bag they had provided, and I was out onto the bike course in first position, pursued by 2013 Ironman World Champion Frederik Van Lierde, and the rest. Thats the easy bit out of the way then…

I really enjoyed the first part of the bike leg; a short sharp hill away from the mount line where I kept my intensity down and gradually slid from 1st to 6th place, and then we were into a fast 25km gradual downhill section – I was very glad to be on my TT bike (as opposed to road bike), despite some raised eyebrows from people before the race. While it was non-drafting a ‘pack’ had formed and I felt I could ride at a maintainable pace and sit at the back of the group in 6th. Motorbike referees ensured there were suitable gaps between the riders and soon two athletes had pushed on ahead. The first half hour went quickly as I got into a rhythm and a routine of regularly sipping my liquids and eating an item of nutrition. We then hit the first climb – Col de Grand Serre – winding its way up 1000m over 15km of climbing to a 1378m summit, unlike anything I’d raced up before. I settled into my own rhythm which I felt was 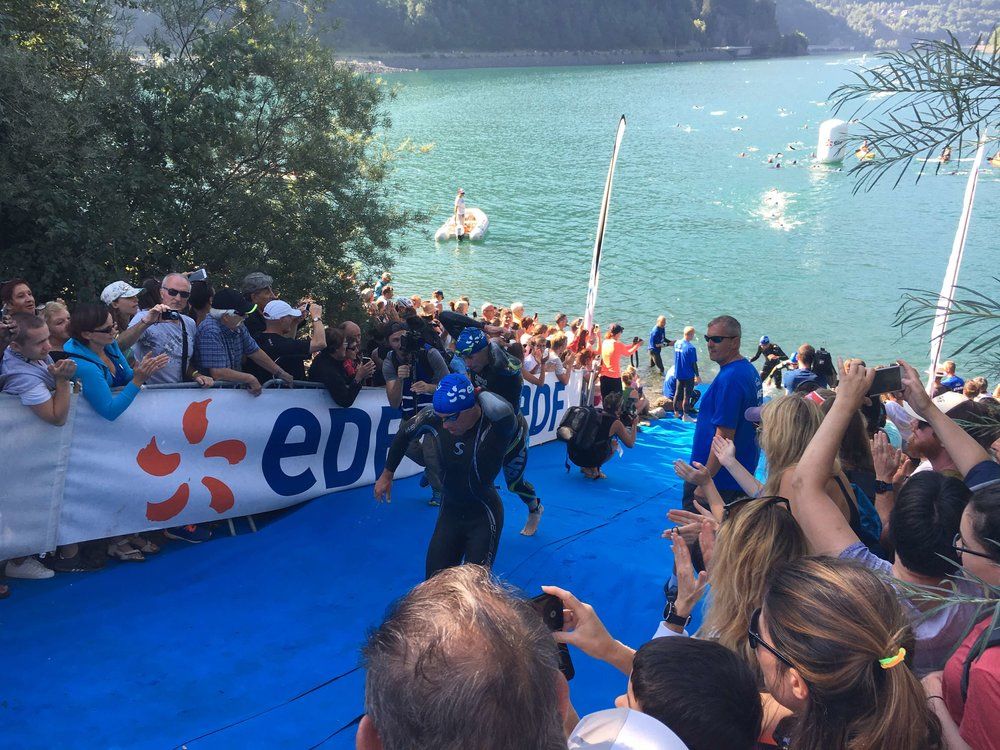 maintainable and the others disappeared on ahead. I stuck to my plan and consequently had dropped down to 15th position as I crested the hill, took on a water bottle from the aid station and set about descending quickly and smoothly into the hot valley below.

After a fast section and making up three places there was a short climb of the ‘uncategorized’ Col de Malissol, (3.4km at 6%), which was fully exposed to the sun and super hot! Next, some more really fast sections where I was again thankful to be on my TT bike, and two aid stations at Valbonnais and Le Perier where fresh bottles were welcome and I tipped water over myself to try to keep cool in temperatures now reaching 35 degrees! The Col d’Ornon is a 14.4km climb at a relatively shallow 3.9% average grade, but most of the climbing is in the final 4km meaning I was able to hold my rhythm and use the TT bars for much of the earlier part which was only around 2%. I again tried to keep my effort maintainable, and a few more riders slid past, but close to the summit (1373m) I felt a couple of twinges of cramp in my calves – not good!

I took on more drinks over the top, had an energy gel and continued eating every 25/30 minutes and descended quickly, really getting into a good flow and loving it. Despite a few cramp twinges I regained a couple of places. Next was a short, flat section back into Bourg d’Oisans and then the main climb of the day, an 8.1% average for 13.2km snaking slowly up the infamous 21 switchbacks of Alpe d’Huez. All I could do was manage my body to try and climb without bringing on any 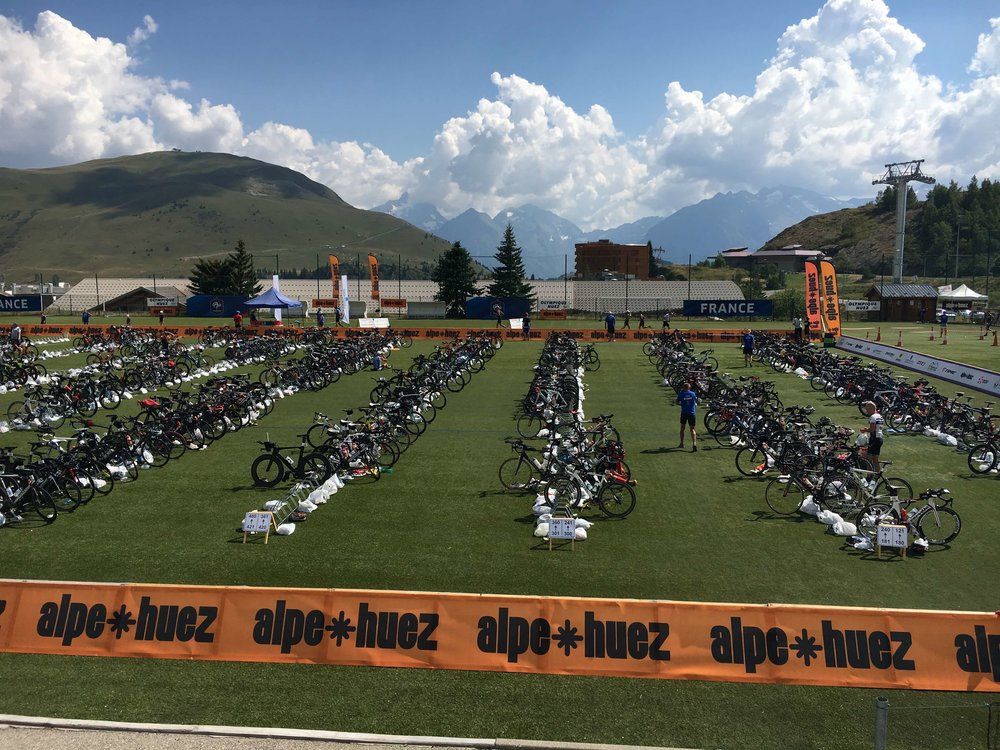 further calf cramps, allowing a steady procession of other athletes to pass me, and passing a couple myself. The heat was stifling, especially during the steeper first half, and the whole climb took me 71minutes without really missing a pedal stroke – something, I realised, that’s pretty difficult to replicate on any UK road, and certainly not in those temperatures! As I snaked my way up the mountain I did sneak a few glimpses back down at the stunning valley below and mountains in the distance – it was absolutely breathtaking in more ways than one and no wonder its such a popular event! Nearer the top the heat was slightly less intense, and eventually I made it to T2 and gingerly dismounted. Thankfully there was a slight downhill ramp to access the soft 3G football pitch for T2 to help me get legs going. I racked my bike and whilst taking my helmet and jersey off and putting on socks, shoes, glasses and cap I was getting all sorts of little cramps in strange places from my hip flexors to elbows and even my hands! 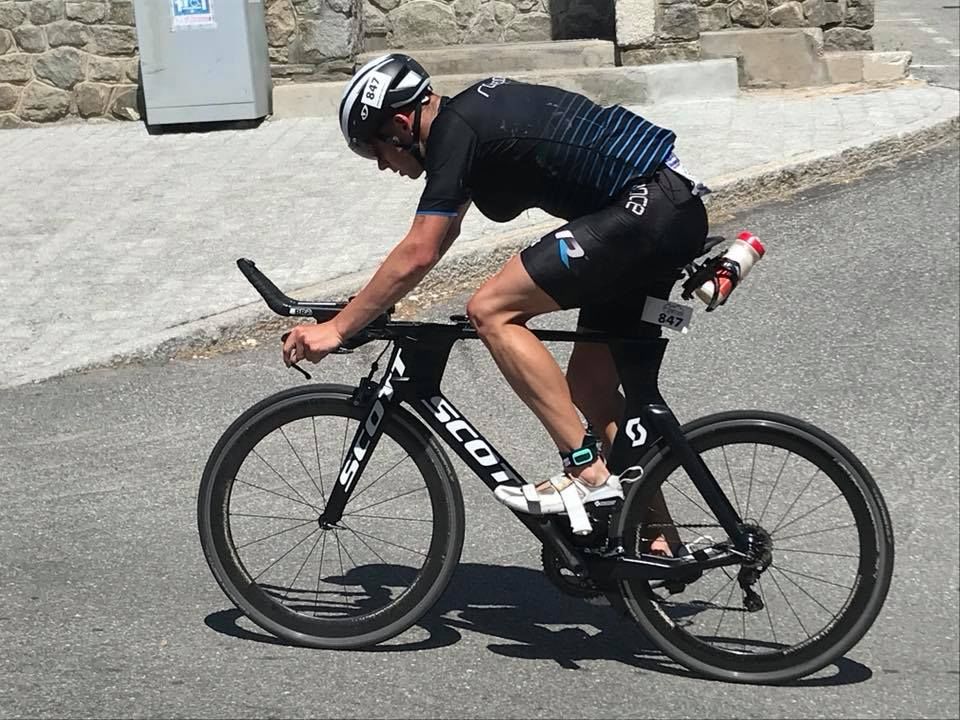 road running in each lap. My legs felt awful, my stomach wasn’t feeling great and it was HOT; all I could do was focus on trying to get my cadence going and relaxing into it, hoping my running legs would turn up – it was far from anything I’d experienced before. A couple of km into the lap and on a sharp uphill slope my right hamstring sprang into cramp forcing me to stop and stretch before gently carrying on – I was definitely experiencing some thoughts of wanting to stop, but there was no way I was doing that!

In general the first half of the lap was uphill, including the trail section, with a downhill slope on the road back into town. On the return I felt like I’d started to find a bit of a flow and was moving ok – just keep taking drinks at the three water stations per lap and keep this going… My quads were sore on the downhill but nothing I couldn’t handle and I made it back to transition with a lap completed and headed out for the second lap. Things began to deteriorate – progressively more frequent cramps in both hamstrings, and general exhaustion slowed my pace further. A stream of athletes were passing me and while I wasn’t feeling negative about that, I was very disappointed and felt let down by my body. I wanted to test my run fitness but my depleted muscles wouldn’t allow it! During the final lap I was overtaken by two british athletes which was a shame as first brit at such an iconic event would’ve been great.

In survival mode I eventually made it round the third lap, almost tripping a few times as my calves sporadically spasmed into cramp. I passed transition for the final time and split off into the finish chute, passing my support for the day, my coach Rodge and Pete. Moving as quickly as my body would allow the slight uphill drag caused a couple more bouts of hamstring cramp, forcing me to stop and stretch it again, before I finally made it to the finish line and staggered over to the ice baths. I was absolutely done and don’t feel I could have done much more on the run. I was disappointed with my run split of 1:57:57 (having hoped for close to 1:30) and more so with how my body felt but finishing in 7:02 just over an hour behind the winner, and in 45th position wasn’t a bad result for my first race of this kind – almost three hours longer than any race I’d done previously and with very hilly terrain and hot conditions. Battling through that run will definitely give me strength to draw on in future and I’m 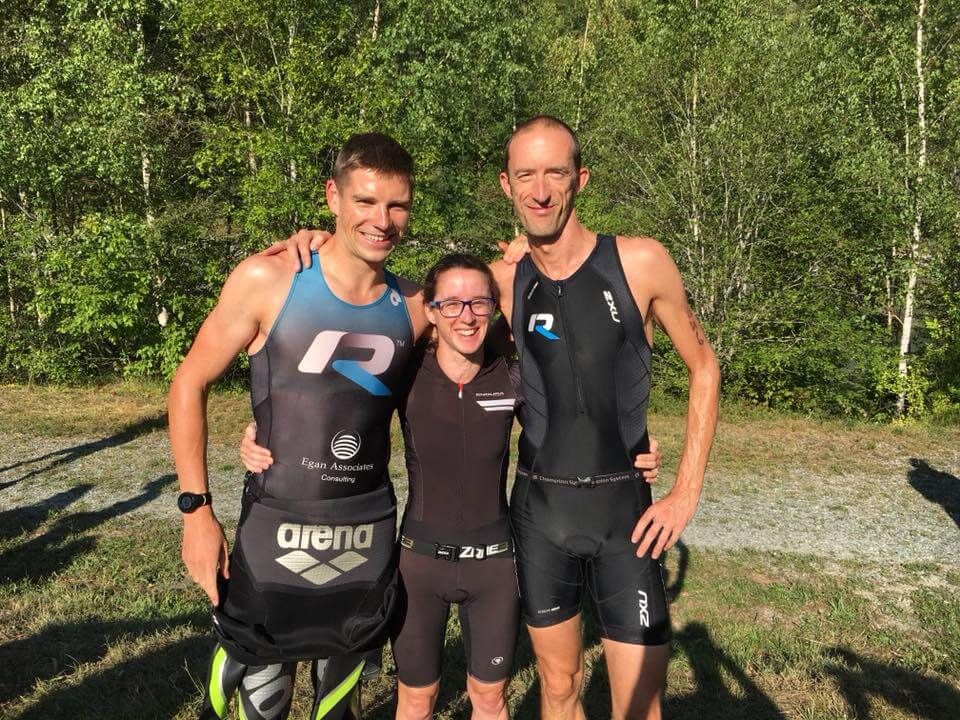 confident my next race, the Helvellyn Triathlon in September, although tough, will feel pretty short in comparison! Well done to all those out there that made it round the course, and maybe one day I’ll be back to try and move myself up the rankings!

I’d like to extend massive thanks to Mark Egan and Egan Associates for sponsoring me for 2018 which made it possible for me to follow through with the initial plans and go and compete in this incredible environment! I’m also very grateful to Solo Sports brands for supporting my swimming with Arena kit, which kept me right at the fore during the swim leg! Finally another big thanks to my coach Rodge at Racepace for the ongoing support and guidance.