On Sunday 30th June our Arena supported athlete @Beau Smith raced in the 3rd round of the @Welsh Triathlon Super Series in the Bala sprint triathlon. Read how things went down here…” 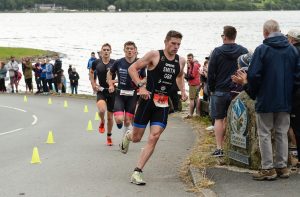 Sunday 30th June was the latest round of the Welsh Triathlon Super Series held at Bala on the edge of the Snowdonia National Park; the sprint distance triathlon was one of a number of events taking place as part of the Bala Big Bash weekend. After taking 4th place in the first round of the series in Llanelli at the beginning of May I was hoping this weekend I might be able to go one better and get onto the podium but I would be up against all three of the athletes who beat me in round 1 so it would be a tough ask! Having registered and carried out ‘media duties’ with S4C on the Saturday evening I was able to have a look at the course which all seemed fairly straight forward with fast and fairly flat, ‘out and back’ bike and run courses (20km and 5km respectively).

Come Sunday morning and things were slightly less than straight forward as strong winds were making conditions on the lake a bit tricky and the organisers were forced to shorten the swim route from 750m to 400m in order to keep the swimmers closer in the bay out of the worst weather conditions. As a strong swimmer I was a bit disappointed by this change although I suspected there’d be little to separate the top guys either way. The air horn went and we were off heading straight into the waves and chop which made breathing a bit of a challenge. I was well in the middle of the melee for the first section but once we made the turn to the return section the current and wind were behind and I was soon up into second position; my arms were turning over nice and quickly and I felt good. Unlike previous races, and typically those with calmer swim conditions, there were big gaps between most of the swimmers and drafting was difficult so I pressed on hoping to gain a gap on the others. Before long I was back to shore and out of the water in second close behind the leader. Quickly out of my Arena wetsuit, helmet on and I was gone, out onto the bike course and up into first place. The bike course was an ideal TT course with decent tarmac and mild undulations and I was looking forward to racing my Ribble Ultra Tri. I got my feet in my shoes and strapped up and settled into my rhythm – I’d gained a bit of a gap on the chasing guys. My effort level felt about right but the speed wasn’t great due to a strong headwind which we battled into all the way out to the turn around point at 10km but after a couple of km I was overtaken and it became apparent that the four main contenders were all neck and neck. It would take something special to gain a significant gap from the others but I worked hard to stay in contact with them to the turn around as I knew the tailwind would make things slightly easier in the second half. The lead changed several times during the second half of the ride and I managed to position myself well to get into T2 second and quickly out onto the run in the lead with the other three in hot pursuit.

I knew I had to run at a pace I could maintain and if I went too hard too soon I’d inevitably blow up and lose more time, so when the three of them came past I had to hold my pace and watch them quickly open up a gap ahead of me. Unfortunately for me they were all running too strongly but I knew they’d be battling with each other and was expecting at least one of them to get dropped by the others and possibly slow down so I kept working as hard as I could and was satisfied with my run split at the end. I finished 4th but was only 55s down on first place which pleasingly was closer than the previous race.

As always I’m grateful to Mark Egan of Egan Associates for the sponsorship for the 2019 season, Ribble Cycles supporting me for cycling and Solo Sport Brands for providing me with fantastic Arena swim kit to train and compete in. 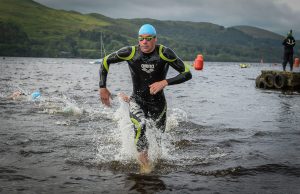