The Snowman Classic distance Triathlon formed the 4th round of the Welsh Triathlon Super Series and with a 1000m swim, a hilly 70km bike around Snowdonia and an off-road 9km run up and down the imposing summit of Moel Siabod, it is certainly the toughest race in the 2019 series. Having gained two fourth place finishes so far in the series I was hoping to finally step onto the podium and the hard work had started weeks in advance. I’d done a thorough course recce so I knew what I’d be faced with and included some specific sessions in my training plan with some decent tempo rides on my Ribble Ultra Tri TT bike straight into tough hilly fell runs in the Lake District – a perfect playground for this kind of training.

The Sunday morning race started at 8:30 under overcast skies (but not yet raining) and for once the swim was going to be the straight forward bit. I got away quickly and soon there were three of us at the head of the race so I slotted into second position and followed the feet in front to save some energy. The pace felt very comfortable, and when I had a glance behind I saw the three of us were slightly ahead of the main pack so I took the opportunity to move to the front and build the pace slightly aiming force the gap – no point letting everyone sit on the feet and save their energy. After the turn buoy at the half way point I pushed on an saw I’d got a gap from the others and settled into a strong but maintainable rhythm all the way back to the lake shore to come out of the water with a bit of a gap from the others. I was quickly out of my Arena Carbon Tri wetsuit and through transition further increasing my lead. Out onto the bike course and into a stiff headwind for the first section.

The bike course being around Snowdonia had split people on whether to race on road bikes or TT bikes but I felt confident descending on my TT bike and on knew flats would be much quicker with the aero set up so was happy to be racing on the TT rig. I tried to settle straight into my own rhythm as I 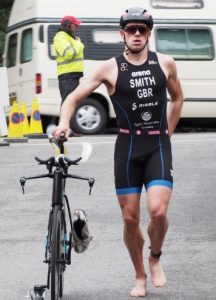 was expecting to be on the bike for around two hours – consistent output would be the most efficient. After a few km I was overtaken and knew that I’d have to push too hard in order to match his speed so I stuck to my game plan and trusted my pacing. I later found out it was Chris Silver, 2018 Commonwealth Games competitor for Wales, who’s already got a 2nd place in the series so was understandably strong. I focused on maintaining my intensity on the undulating terrain, not pushing too hard on the hills and not taking it too easy on the descents, cornering fast and smooth, gaining seconds where I could. I also kept on top of hydration and nutrition, eating a piece of my Voom pocket rocket energy bars every 15 minutes to keep me topped up. Other than some of the ‘Legend 70.3 distance’ athletes I didn’t see anybody else during the ride, other than the TV camera bike popping up to film my progress every so often. I arrived back at T2 mentally ready for a tough run, but with a 4:15 gap to try to close to Chris. Off-road trainers on quickly and my vest pack (kindly lent to me by my friend Andy) with a drink and the compulsory safety items to have on the mountain, and I was out onto the run course – that’s 10 seconds pulled back.

The run course took you over a narrow bridge beside the lake and within a minute you were working your way up through a forest onto a steep gradient which was pretty unrelenting all the way to the top. I focused on working at an intensity I could maintain, knowing that if I went only slightly too far into the red there’d be nowhere to recover for the rest of the ascent. It was a calf burner rather than a lung buster )due to the length of the race) but once into the second half of the climb the visibility reduced as I slogged into the clouds so I was thankful to have done a recce and be confident of the route to the summit cairn. As I nearer the top I saw Chris on his descent and took note of the location and time on my watch so I could check the gap. A couple more minutes of climbing and the grade eased to the top so I could get my legs moving a bit quicker and lengthen my stride. The summit soon appeared from the clag and I was straight into the descent, picking up speed and hoping my legs would hold up with the battering I was about to give them. Having a substantial background in off-road running with the guiding work I’ve previously done with Love Trail Running was a massive help; I was confident I could descend really well. I passed my marker and saw the gap to Chris was now almost six minutes and realistically the race was his (to lose?) – but never say never! I flew down the hill, skipping over the gnarly ground as quickly as my brain could compute the steps, 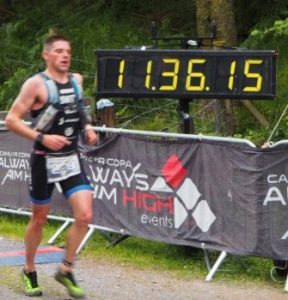 and watching out for oncoming runners who were still making their ascent. I saw I had a significant lead over the next athletes so all my attention was ahead. When I was a good way down the mountain a marshal told me I was about 3 minutes down! “Is he cramping up and falling apart!? Don’t worry just keep pushing!“. The final section, possibly a mile or so, was on a wide track so not quite as technical and I was told I was less than 2minutes behind. I built as much as I could and pushed all the way to the finish and felt I went as hard as I would in any sprint distance race, crossing the finish line in 2nd place 1:55 behind Chris. I was chuffed with my run, which turned out to be the fastest split of the day, and was quietly very satisfied that my specific prep had paid off, even if I wasn’t quite strong enough to match Chris’ phenomenal ride. As a bonus, for making it onto the podium I got my hands on one of the lovely Welsh Triathlon bobble hats that I’ve twice missed out on earning! The race certainly spiced up the series this year and on the current rankings I am in third position, although I won’t be racing in the 5th round at The Gower, so other athletes may leapfrog me after that event. 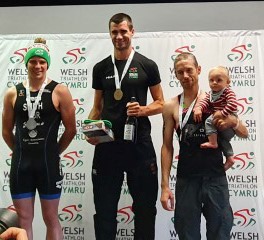