While the Slateman Triathlon is still a relatively early season event I had done some good, specific preparation for it and in the days before the race, I was raring to go! The invaluable, helpful team around me had all assisted in the preparation leading to me feeling very ready to go. Obviously, firstly my coach Rodge with specific training sessions to prepare for the course and planning a group recce for the event a few weeks ago. In addition I’d borrowed a disc wheel from a friend (cheers Ben!), the legend that is Pete Jepson had fettled my bike to be in top condition, I’d got my Arena wetsuit, goggles and new Fast Tri Bag thanks to Solo Sports, I’d had a massage with the one and only Jane in Longridge earlier in the week and I travelled down to North Wales on the Saturday with my Mum to stay with family who live about 30 minutes away from Llanberis. Everything had been put in to place to give my best performance and hopefully be right up there fighting for the win.

Sunday morning arrived and after my porridge with banana and a short drive to the event I was registered and racked without any delays. I did a quick warm-up jog around the first and last stints of the run route to check exactly where I was heading and where the finish was. I was soon into my Arena wetsuit and ready for the suit’s first competitive outing. The lake was fresh at around 14 degrees but considerably warmer than when we recced it a few weeks ago. I was in wave 1 and at 9:30 am we were off – the very early stages were above my race pace to get myself into some clear water as planned. Before long I settled to my race pace for the 1km and got into a good rhythm, and moved into the lead, sighting every 10 strokes or so to ensure I was always on the shortest line. I felt good and exited the water first with around a 30s lead and around 80s over the first main group with some of the main contenders. A slick transition and I was out onto the bike and pretty much straight into a headwind. As planned I took it steady for a couple of minutes to find my legs but didn’t actually feel that great. However, I was soon into some kind of rhythm and before long was onto the slog that was Pen-y-Pass.

After the pass, there were some really fast sections with a decent tailwind, smooth tarmac and the disc wheel flying along. Around half-way through the bike leg I was battling a stiff headwind when I realised two other athletes had caught me up. For the remainder of the bike leg, the lead changed a few times with Jack Hindle often leading the climbs and myself keeping more momentum on the faster downhill sections and several times spinning out my top gear. Close to the end on a tough drag on some grippy tarmac the third athlete, Pete Dyson, threw down a challenge and raised the pace, trying to build a lead before we got back to T2. Luckily I had the strength to follow the pace and keep myself in the race, although not without working fairly hard. Before long the three of us were back into T2 close together and I was quickly out on the run course with a narrow lead.

I focused on getting my cadence going and not pushing too hard – it was going to be a long and tough 11km! Jack and Pete soon came past me and this time I had to focus on executing my own race, knowing I simply wouldn’t be able to maintain the pace they were running at. It remained to be seen whether they could, and I kept that in mind, knowing I wasn’t necessarily out of the running just yet. Having prepared so thoroughly and discussed tactics with Rodge regarding trying to win the race I did find it difficult watching the other two running away and quickly stretching out a lead on the first, and relatively flat, section of the run. A combination of not feeling great, and watching the leaders run away did mean I started to feel a little bit negative, and that was to be my challenge. As I laboured up the steep climb through the slate mines I was able to turn my mentality back around and focused on simply giving my best and running the best I could all the way to the line. The second half of the run was more to my favour with some technical off-road sections and some fast downhill stints. My legs were feeling it but I didn’t deviate from my aim and pushed hard all the way to the line, finally finishing in 3rd position in 2:31:21, behind two strong athletes.

In summary, I would say I was pleased with my performance, satisfied with the result, and really happy that I overcame the negatives I was feeling during the run to finish strongly and keep fighting right to the line. It was a great event to be part of, and good preparation for my bigger races later in the season. After some recovery, my next race will be the Standard Distance Triathlon at the Keswick Mountain Festival Weekend where I will aim to defend the title I won in 2017! 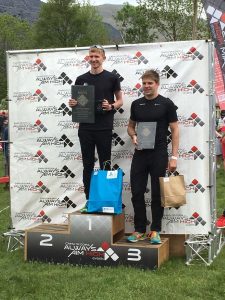 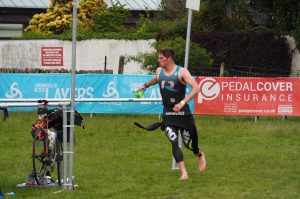 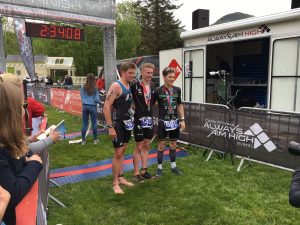