Sunday 1st September saw one of the toughest triathlons in the UK – the TriHard events Helvellyn Triathlon. arena supported athlete Beau Smith was looking to improve on his 2nd place finish in 2018.
@trihardevents @TriHardUK
Read his story here –

Often billed as the toughest triathlon in the UK, Helvellyn Triathlon is quite simply a bit of a beast! Having raced there last year and finished 2nd I was back in 2019 and hoping to perform better and hopefully bag myself the top spot! The event format is a 1mile swim in the fresh waters of Ullswater, a 39mile bike (slightly longer than usual due to a road closure through St John’s in the Vale) and then a 9mile run up to the summit

of England’s 3rd highest mountain before flying back down to finish in Glenridding.

The race got underway, after a few very heavy showers, at 8:30am and I was quickly into my stroke, my arms feeling good in my arena Carbon Triathlon wetsuit. I soon had clear water and after checking there was nobody drafting on my feet I settled to a nice tempo which I could maintain and set about holding the rhythm. I ticked the swim off without incident, sighting regularly to maintain a straight course between marker buoys and was out of the water in just over 17:30. Coming out of the lake I had a quick check and was comfortably clear so I was straight through transition, wetsuit off and into my arena ST tri suit, helmet on and onto the road to get on my bike. 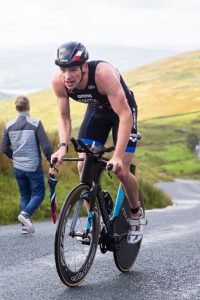 Given I had a lead and was feeling good it would be easy to go hard straight from the off but I knew I had to be disciplined and smoothly started to time trial my way around the 39mile course. The Ribble Ultra Tri TT bike was feeling great, I was climbing smoothly and flying along the flats and downhill section, strictly sticking to my aero position. I kept my hydration topped up despite a cool, overcast day with a few showers, and I took one piece of my Voom Pocket Rocket energy bars every 15minutes to keep my energy topped up. Before long I was at Ambleside and straight onto the steep ramps of ‘The Struggle’ which I had climbed quite recently with a training friend. We had gone hard right from the start that day and it was hard work all the way up; in contrast today I would keep a very steady rhythm and try to hold the power as consistent as possible. I kept the power down on the steeper sections but pushed on the flatter parts to ensure the power didn’t drop off. By the time I reached the top of the Kirkstone Pass I was definitely starting to feel it and my heart rate was up, but it was nowhere near as hard as racing up it with my friend previously and yet this time round I was marginally faster – remarkable how pacing affects perception of effort! All that remained was to safely negotiate the sketchy descent and then roll along the fast section back to Glenridding. 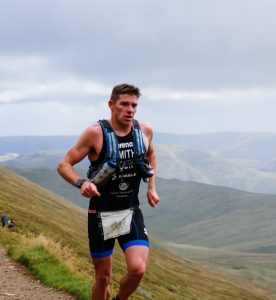 I was quick again in T2, opting not to wear socks, and was soon jogging out to start the run, fastening my vest pack as I went. The severe run course dictates that each competitor takes adequate kit for a safe fell run including full body cover, map and whistle. I was feeling good, reaping the benefits of a disciplined and smooth bike ride, and in a way the race was mine to lose. I was leading at this point in the race last year though, so I wasn’t counting my chickens and was going to run as best I could and be ready for a battle if someone caught up with me on the way round. At 950m above sea level, England’s 3rd highest peak can be a daunting prospect and when approached from Glenridding side the strikging Striding Edge and Swirral Edge are guarding the two flanks. After slogging up Birkhouse Moor with a combination of jogging and power walking I was able to stretch my legs on a slight downhill and flatter section past ‘The Hole in the Wall’ and Red Tarn before heading up onto Swirral Edge. I was eventually caught by a fast running relay team member on the scramble up the edge so I was able to follow his line as an experienced fell runner. I worked hard and was finally at the summit and was soon descending and chasing the relay runner. He was a little surprised when I caught him up again and we subsequently ran together for a few minutes. I would have loved to have battled with him all the way back down as I felt I could match him at descending but there was a further ascent up White Side and his fresher legs meant I wasn’t able to stick with him. The rest of the race was straight forward for me and I descending strongly but carefully and was soon running back through the village of Glenridding where there was plenty of support from both those associated with the event and various other onlookers! It was great to cross the finish line and realise my run split was around 7 minutes quicker than I managed last year and to win such an iconic race with a strong performance was fantastic. Post-race as always it was great to share stories with other athletes about such a varied and testing race and one of the massage therapists happened to be an old university friend so was great to have a catch up while he stuck his elbows in my sore muscles – cheers Dan! Congrats to Ben ‘Wilf’ Goodfellow who improved on his 3rd position in 2018 to finish 2nd this time around, and to all the other athletes who took on the event.

As always it’s important to me to acknowledge the invaluable support I receive from Arena UK through Solo Sport Brands, Ribble Cycles, Voom nutrition and Egan Associates, as well as friends and family. It only feels like a couple of weeks since the season started but I now only have two races left in my 2019 multisport season! 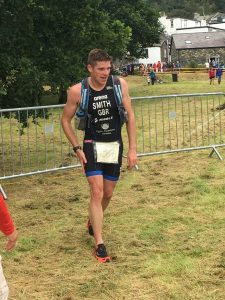